One role you DON’T want to play is that of Scrooge...

Give that someone special the Best Gift - an exclusive LF Gaming Chair or Seat Cushion.

Gaming chairs tend to all be very similar to one another. Wide, flared out shoulder padding, a complimentary lumbar pillow, a cutout or two to keep the chair properly aerated from any sweat, coupled with an over-the-top "GAMER" color scheme and an intimidating look are the tell-tale signs of a typical gaming chair. Though most of those chairs have different brand names and logos slapped onto them, nearly all of them are built and shipped from the same little chair factory somewhere in China. And for many, that's totally fine--but for others, they might be left wanting for a better chair, something a little less generic, a bit more quality.

So what happens when you go further beyond, to find a gaming chair that isn't obnoxiously large and in charge? Well, that brings us to our review today, featuring something that does just that. Rather than existing solely as a gaming accessory company, LFGaming is a subset of Lifeform Furniture, a Canadian manufacturer who has been making high-end office furniture since the 1970's. With so many years of experience under their belt, Lifeform already has a leg up on the competition, as they're not just cloning what everyone else makes; they've been making these types of ergonomic chairs since before most of us were even alive.

Prior to getting my hands on the review unit, I actually tried one of LFGaming's chairs during E3 2019. I was tired, after having walked the show floor for a dozen hours, completely exhausted and more than ready to sit down. Conveniently, there just so happened to be a booth that consisted of nothing but chairs, chairs as far as the eye could see. I couldn't resist the chance to just rest for a few moments, so I sat myself down in one of the unique-looking seats. My first impression was that I must have been dreaming about the whole thing, because it felt more like sitting on a cloud. I was so used to cheap office chairs with unsupportive mesh backings, or gaming chairs that didn't have nearly enough padding. That experience is what initially interested me in what LFGaming had to offer--of course, it could have just felt good to sit in any chair after a long day of nonstop walking, but I knew I had to test one out, eventually, to see if they truly were amazing as I first thought. 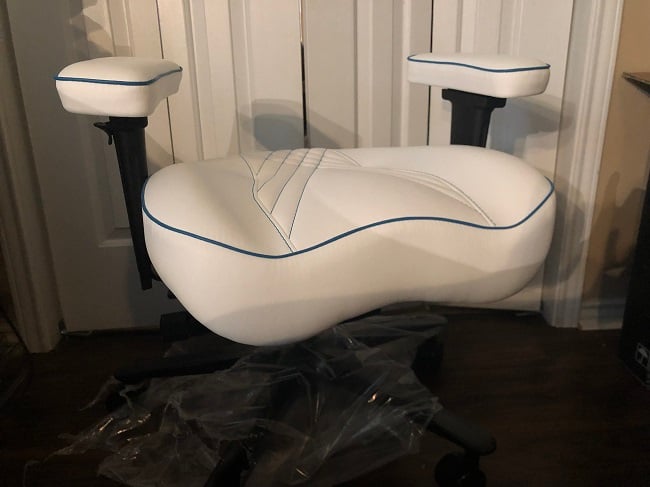 And try one I did, as a few months later, one of those very chairs arrived on my doorstep, packed into a set of boxes. I mentally prepared myself for the task of assembling the chair, but by the time I had opened the box, I'd realized that there was hardly any work to do. I simply attached the arms, and slotted the backrest to the seat, securing it with the included bolts and allen key. If those instructions are unclear, somehow, there is a video tutorial, alongside a very brief printout on the box, which will help guide you. If you've ever put together a piece of Ikea furniture or another gaming chair, the process is simple enough, despite the time-sink. With the Stealth, it was basically already done for me, packed and nearly ready to go from the outset, which was a nice touch.

The Stealth I was provided with came in white, with lovely blue trimming along the edges and stitching. It was subtle, and offered a hint of a gaming-flair to my office, but it was still lowkey enough to not stand out and impose its presence upon the room. Since it looks more in line with a piece of office furniture, it fits far better in a more professional looking room; it's bright, but not jarringly so, and it looks inviting and enjoyable to sit in.

You've got all the trappings that one has come to expect from a chair: a tilt mechanic, the ability to lean the seat back, height adjustment, and wheels that let you roll across the room. The wheels are especially nice, and move quietly and smoothly, which is small in the grand scheme of things, but it just goes to show the level of effort and care and the solid materials that went into building the chair. All of the other general functions worked well, though having a plastic coating on the seat back adjusting bar came off as a little cheap and disappointing, when the rest of the chair is otherwise premium and top-of-the-line. The Stealth also boasts some features not found elsewhere on most other chairs: in-built lumbar support (say goodbye to those cheap pillows), and a ratcheting seat back. The latter of which allows you to freely pull up on the back of the chair in order to raise or lower the backrest, to align better with your spine. Since I'm 5'2, the shortest option suited me perfectly, but taller individuals that wanted to use the chair could simply adjust it to match their own height and body type, which is perfect.

Now, we move onto what could possibly be the most important topic about LFGaming's little chair, the comfort. This is, quite possibly, the best chair I've ever sat in. Memory foam cushions you as you sit on the chair, while the seat is designed for your legs to rest comfortably in the indents, with all the padding that you could ever need. It's soft, it's plush; every facet of the Stealth is pleasing to sit upon. I found myself sitting upwards without a slouch, as pressing my back to the chair gave me enough support, for both my spine and my head, without making me feel like I was straining myself by sitting perfectly upright. Even the armrests are puffy and a delight to position my arms towards my keyboard and mouse, without any stress. This was the kind of chair that I could sit down at any angle, at any moment, and be perfectly comfortable and relaxed. 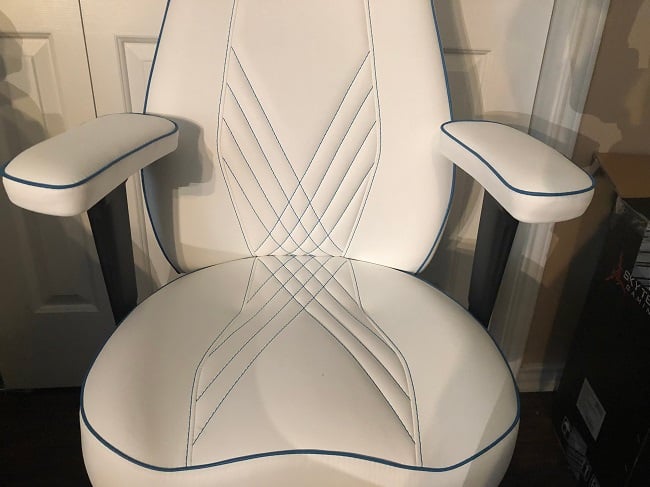 Hands down, one of the most important details about a chair is how breathable it is. As many of you know, I live in Houston, Texas, otherwise known as a literal swamp. It gets hot, it gets humid, and even the best air conditioning can't save you from getting overheated while sitting down anywhere. Most chairs tend to have holes throughout their fabric to help cut down on how much heat is spread, but the Stealth does not. Instead, it uses "ThermaGuard" technology, which utilizes something called "Phase Change Materials". Breaking that down into simpler terms, this is something unique to Lifeform's products that allows them to regulate temperature, meaning if it's hot, the chair will be cold when you sit in it, since the material reacts to body heat, cooling the entire chair down. I was pretty skeptical of the claims at first, because I've seen chairs market their "cooling gel" to no avail, as they would still wind up becoming unbearably hot after a few hours. Whatever science that goes into the ThermaGuard process works, however: this chair never once got too hot to sit in. It really makes you wonder why other gaming chairs are made out of that "car seat" material; everyone knows the horrors of getting into a car on a burning hot day, so why apply it to a chair? To contrast, the material of the Stealth, called Brisa, is light and soft, and manages to feel both comfortable and pleasingly cool to the touch, even after having sat in the chair it for hours at a time.

There was only one thing that I was ever left wanting from the Stealth, and that was an ability to move the armrests back and forward. In some cases, tilting the rests weren't enough, and it would have been really nice to have that as a feature, especially since many other gaming chairs make use of it. For the most part, I didn't really have an issue with that lack of adjustment, but that handful of times that it would have been useful really did stand out to me.

So, something that's bound to be a point of contention is the price of the Stealth. Sure it's a fantastic chair, but how much does it cost? The answer is, at minimum, $1,395. That might sound mind-boggling at first, especially for a piece of furniture--for that same amount of money, you could amass an entire army of cheap racing-back gamer chairs. The price isn't the only factor that sets the Stealth apart though; you have to consider the fact that these aren't your average factory-cloned gaming chair. They're made by an actual furniture company (think: Herman Miller, Knoll, Steelcase) that specializes in luxury office furniture, meant for professionals and those who don't just play games, but need to sit for hours on end to get work done without burning out from fatigue. That doesn't mean this kind of price tag won't put it out of most people's budget, but considering what you get, it's fairly reasonable, even if it does sound like a lot of money. 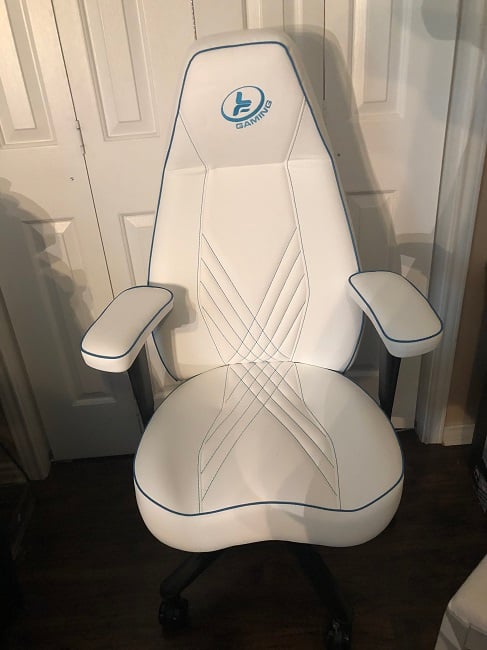 In my time with the LFGaming Stealth, I was incredibly impressed. You might think, "it's just a chair", but when you need to be at your desk, playing your games, reading gaming articles, or discussing the latest gaming topics online, you're going to want a chair that'll support you. You're also going to want something that's comfortable, and will last you for years to come, making for a good investment for your posture and your overall health. Yes, the price of the Stealth is far above that of the average gaming chair, but that's the entire point--this isn't some factory-cloned gamer racing chair--this is an actual piece of office furniture, given a gaming flair, to market towards that bracket of consumers. Whether or not you're part of that consumer-base comes down to how much your wallet would object to such a cost, but if you need a quality chair, one that'll last you a decade, a seat that'll ensure good ergonomics and perfect comfort, this is a fantastic choice.